Physical aspect of MOI and Swingweight

MOI is a basic physical quantity which represents the heft that resists rotational acceleration of the club around the wrist hinge of a golfer.

Swingweight is an empirical approximation of the heft of a golf club that is felt by a golfer. Swingweight doesn’t represent anything really physical in a golf swing.

MOI is measured and expressed in units of mass-times-length-squared. Clubmakers use g-inches-squared, kg-inches-squared or kg-cm-squared. MOI is a non-linear function of distance. The total MOI of the whole club is the sum of MOIs of all grain of mass (grain mass times the square of the distance to the axis).

Swingweight is measured in units of mass-times-length, e.g. g-inches and convert the value into artificial scale The value is expressed in a letter number designation. The lower the letter and number, the less the headweight will be noticed by the golfer when the club is swung. A0 is the lightest measurement, progressing up to the heaviest, G9. Swingweight is a linear function (mass times the distance to the axis). It can be calculated as mass of the whole club times the distance from the center of gravity to the axis.

The axis of MOI is at the butt of the club

The axis of Swingweight is 14 inches (“Lorythmic scale”) or 12 inches (“Official” scale) from the butt of the club. 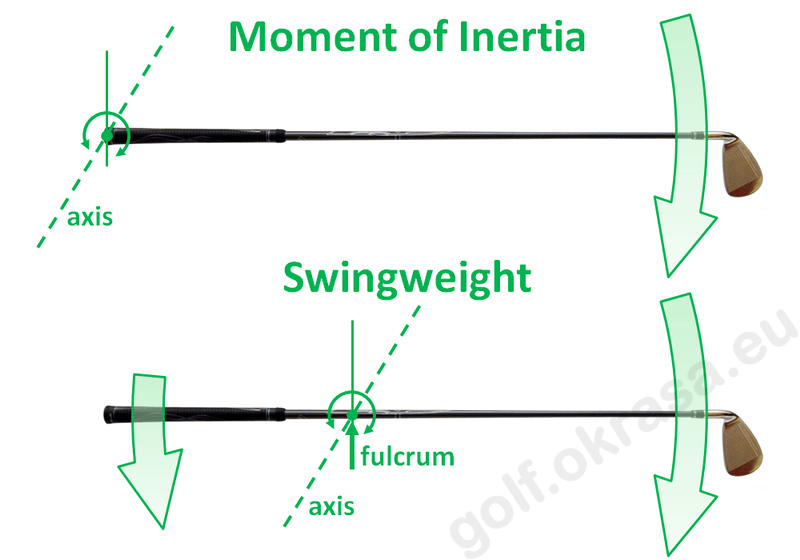 MOI can be measured with dedicated electronic devices. It also can be determined by formula and general-purpose tools: a postal scale, a ruler and a stopwatch. The method is described here.

Swingweight can be measured with dedicated electronic or mechanical devices, but it can be also determined by formula and general-purpose tools: a postal scale and a ruler. The method is described here.